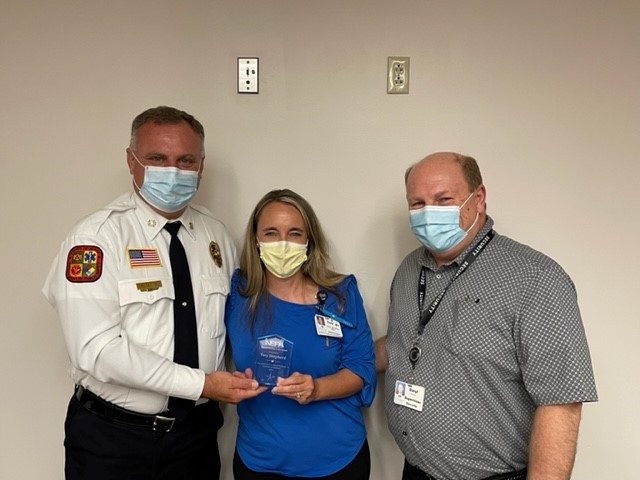 Tory Shepherd, COO at Sovah Health – Martinsville, was recently presented the 2021  Outstanding Individual Award from the Near Southwest Preparedness Alliance (NSPA) for her work with vaccine distribution during COVID-19 pandemic.

Shepherd was recognized for her incredible initiative in organizing numerous partnerships to form a local vaccine coalition, which was comprised of more than 30 officials representing the West Piedmont Health District (Franklin County, Patrick County, Martinsville City, and Henry County).  This led to the highly successful COVID-19 vaccination distribution operation for these communities.

Once the COVID-19 vaccine became available, Sovah Health - Martinsville was identified by the Virginia Department of Health as a partner to assist in distributing doses. Initially, Sovah Health - Martinsville was charged with providing the vaccine to healthcare workers and First Responders, and after effectively and efficiently offering ample opportunity for these individuals, began identifying additional Tier I individuals to whom they could assist with getting the vaccine.

As time passed and the vaccine became more readily available, Shepherd took it upon herself to create the local vaccine coalition.  During the first meeting, Shepherd led the way in quickly setting up a plan to conduct a drive-thru vaccine clinic effectively, efficiently, and safely at Magna Vista High School.

Less than 2 days after the initial meeting, the first of 485 vaccine doses were administered at the drive-thru event.  This model was soon repeated in Henry County, the City of Martinsville, and Patrick County, leading to the distribution of thousands of vaccinations all under the direction of Shepherd.

Matt Tatum, director of the Henry County Department of Public Safety, nominated Shepherd for the award.

“Ms. Shepherd's partnership, resulting in her personally serving in the cold, wind, rain, and yes, a few pleasant days, led to the administration of thousands of vaccines being administered throughout Henry County, Patrick County, and the City of Martinsville,” said Tatum. “In over 30 years of service in emergency services, I have never experienced a more extraordinary partnership, especially one led from the front, as demonstrated by Ms. Shepherd and her efforts to provide the COVID vaccine.”